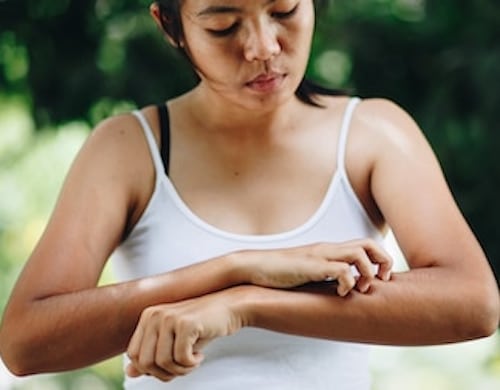 Skin conditions are caused by allergic reactions that occur on or under the skin and are one of the most common forms of allergy treated and managed by an allergist. Irritated skin can be caused by a variety of factors, including immune system disorders, medications, and infections. Our extensive testing can help identify allergies and guide treatment. Atopic dermatitis, also known as eczema, is an itchy, red rash often associated with allergies. It commonly begins in the first year of life. The rash frequently appears in skin crease areas such as the elbows, knees, and wrists. It often affects the ankles, hands, feet, and face as well.

The skin is usually dry and scaly, and red bumps may appear. The skin can become raw or weepy when it is scratched, and skin thickening may develop in areas of chronic involvement. Affected skin may also be prone to bacterial and viral infections.

There is no cure for eczema, but good daily skincare is essential to controlling the disease.